Croquet is OK! and lots of fun.
Come and try it for yourself at our
OPEN DAY - Sunday 13th May from 10am. 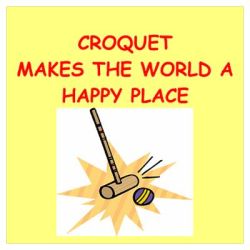 Seen it being played in Cassiobury Park (near the Cha Café)?

Why not find out more about this fascinating game?

Watford (Cassiobury) Croquet Club are running an Open Day on the 13th of May between 10am and 5pm to introduce croquet to Watford and surrounding areas. Join us to have a try, and enjoy a cup of tea/coffee and a biscuit. All free, and no advance booking required - just come and have some fun in the fresh air of Watford's Cassiobury Park.

Croquet is playable by all ages, and from absolute beginner to World Championship* level.

All equipment will be provided and no special clothing is needed, but please wear flat soled shoes or trainers to avoid damage to the lawns.

For anyone interested in following this up afterwards, on the three Sundays following the Open Day there will be an Introduction to Croquet course.

*For many people croquet is just played socially, and if that is what you want that is fine. For some it is also a proper competitive sport played at many levels from inter-club matches right up to World Championships. But since croquet is an entirely amateur sport this side of the game gets little publicity. The World Croquet Federation staged the 2013 Championships in Surbiton, which were won by a 20-year-old from Australia, and his successor in the 2016 Championships held in West Palm Beach, Florida was a 62-year-old from England. Clearly croquet is indeed a game suitable for all ages! (And just a couple of months later in 2016 the new world champion was here at our courts in Cassiobury Park giving free coaching to some students!)